Loverly Facts About My Fair Lady

You know all the lyrics word for word, but do you know these facts about My Fair Lady?

My Fair Lady has been referred to by some as the perfect musical. It premiered in 1956 on Broadway and has seen itself land on the big screen as well as multiple revivals over the years in both New York and London, including this beautiful Tony-winning production that premiered at the Lincoln Center. You may know every song word for word, but do you know these facts about the loverly musical which stole all our hearts?

THE SHOW HAD A NUMBER OF TITLES

If it wasn't for lead Rex Harrison, the show may have been called Lady Liza, a name evolved from the original idea Liza. Harrison didn't want his character to be seen as second fiddle and objected to the name being based solely on female lead character Eliza. Alternative names were then tossed around including Fanfaroon, which is a slang term for "one who brags about himself". Finally, Loewe and Lerner found the name My Fair Lady from the nursery rhyme "London Bridge is Falling Down".

The show's album headed the top spot at number one for 15 weeks! The cast recording became the best-selling album that Columbia Records had ever seen.

Though Julie Andrews's talent was showstopping on stage, she wasn't invited by the Warner Bros. studio to reprise her role for the big screen. Instead, they invited Audrey Hepburn to star in the role of Eliza. Though she worked tirelessly with a vocal coach, director George Cukor made the decision to dub over 95% of Audrey's singing. The voice you hear is actually Marni Nixon who has also done dub work for The King and I and West Side Story.

Audrey later admitted she would have never accepted the role had she known her singing would be dubbed over. After My Fair Lady, Hepburn put her foot down and stated she would not appear in another musical unless she could do the singing on her own. My Fair Lady was the only and last musical Audrey starred in.

THE 5% AUDREY DOES SING

You'll be able to hear Audrey singing in the first verse of 'Just You Wait, Henry Higgins' and in the last 30 seconds. Midway through the song, for the soprano range, Marni Nixon takes over vocals. Audrey also sings the talking parts of 'The Rain In Spain'.

Does everything happen for a reason? We believe so. If Julie was invited to reprise her role as Eliza then we may never have had our 'practically perfect in every way' Mary Poppins. The 1965 Golden Globes solidified that Andrews was placed on the right path when both Andrews and Hepburn were nominated for the Best Actress award (Andrews with Mary Poppins and Hepburn with My Fair Lady).

Andrews took home the victory and in her speech said "Finally, my thanks to a man who made a wonderful move and who made all this possible in the first place: Mister Jack Warner" (I like to think Julie Andrews did a mic drop here, but something tells me she didn't). Andrews then went on to win an Oscar for her performance in Mary Poppins.

You can catch the stage version of My Fair Lady as it's currently touring the U.S. Be sure to share these facts around as you wait for the curtains to rise, it'll make everything just that little more loverly.

Broadway and Show news straight to your Inbox!

Read how we protect your data. 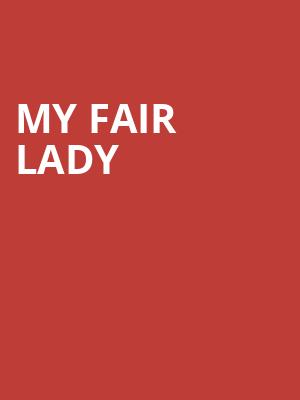