Sorry! You missed I'm With Her at The Kent Stage 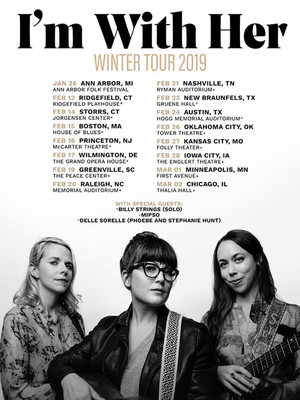 Each song in the trio's generous set was meticulously arranged to make the most of the many ways the musicians could blend. Serene understatement was the concert's hallmark; at times, the music was so quiet I could hear the club's floorboards creaking.

Why See I'm With Her?

Separately these three performers are respected solo virtuoso that have left their mark on the Americana landscape, but Sara Watkins, Sarah Jarosz and Aoife O'Donovan were brought together by chance when their lilting harmonies soared during an impromptu gig in 2014. That small spark lit the fires of I'm With Her, the trio's brand new project. Catch them on their 2019 Winter tour!

Sound good to you? Share this page on social media and let your friends know about I'm With Her at The Kent Stage.