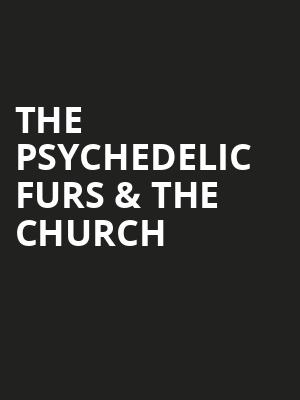 The Psychedelic Furs & The Church

"There's been no sign of a new Furs album since 1991, but these ageing songs sound as if they were recorded yesterday."

Why See The Psychedelic Furs & The Church?

After first attempting to tour together waaaay back in 1988, The Psychedelic Furs and The Church, two giants of post punk are finally heading out across North America, bringing their brooding energy to MGM Northfield Park in Northfield , OH , July 22, 2022 .

Emerging towards the end of the punk scene, The Psychedelic Furs revolve around brothers Tim and Richard Butler and their art-rock, indie rock sound. First landing in the US in 1986 with the use of their song 'Pretty in Pink' in the John Hughes movie of the same name, their record 'Talk Talk Talk' became their breakthrough. After returning from hiatus in 2001, they have toured extensively and still influence up and coming acts today.

In some ways their antipodean counter-parts, Aussie alt rockers The Church join them on this tour. Crossing over in 1988 with 'Under the Milky Way' from their album Starfish, they continue to make music and recently released their 21st studio album in late 2014.

Sound good to you? Share this page on social media and let your friends know about The Psychedelic Furs & The Church at MGM Northfield Park.