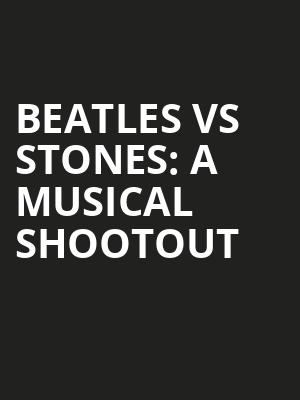 Beatles vs Stones: A Musical Shootout

Two tribute acts to the 60s icons battle it out

Why See Beatles vs Stones: A Musical Shootout?

Let It Be vs Let it Bleed

It's the age old question - who was better, The Beatles or The Rolling Stones? Well ponder it no longer, because you can see both bands in action, fighting out, in this groovy tribute to the 1960's two most important acts. Representing Liverpool's finest are tribute band Abbey Road, while the notorious London bad boys are played by Satisfaction. The two of them will duel it out with alternating mini-sets, before they 'Come Together' for a glorious finale.

Expect to hear all the hits from the Beatles and The Stones 60s heyday, including 'Hey Jude,' 'Jumpin' Jack Flash,' 'Something,' 'Brown Sugar.' 'Let it Be,' 'Let's Spend the NIght Together,' and many many more!

Seen Beatles vs Stones: A Musical Shootout? Loved it? Hated it?

Sound good to you? Share this page on social media and let your friends know about Beatles vs Stones: A Musical Shootout at Goodyear Theater.